We ended the 2017-2018 fiscal year with a total membership of 192 alumni and friends which represents only a small portion of the more than 600 alumni identified as living in the area. Our goal for 2018-2019 is to enroll 200 members. The current Board stands committed to carry on the traditions of service, scholarship and community that are the hallmark of a Penn State education. WE ARE... what we do and what we have become. Join us! 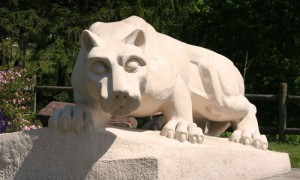 The first meeting to create the Myrtle Beach chapter of Penn State Alumni was held on November 18, 2010 with the PSU Alumni Association Regional Director (Cheryl Stringer.) Harry Wynn, Phil Cox, Alicia Smith, Garrett Miller, Kelly Shulkitas, Bob Bastian, Jean Bastian and Tom Turan were in attendance and became the first board in January 2011, with Harry assuming the first presidency. This intrepid group of transplanted Lions initially thought that they would prefer the name "Grand Strand" and "Greater Myrtle Beach" but later settled on the current "Myrtle Beach Chapter" name. The founding Board members set out an ambitious agenda of activities and in their first year enrolled 20 members.

By Laws for the new chapter were officially adopted January 19, 2011. Afterwards the initial Annual Picnic was held prior to the kick off of the 2011 football season August 14, 2011 at Myrtle Beach State Park; which was catered by Joey Doggs. Viewing parties were held at Handley's Pub and Grub in Myrtle Beach.

The chapter has been active ever since. The following highlights identify some of the more important activities and accomplishments in the years that have followed.